The World's End is coming to Blu-ray this November! 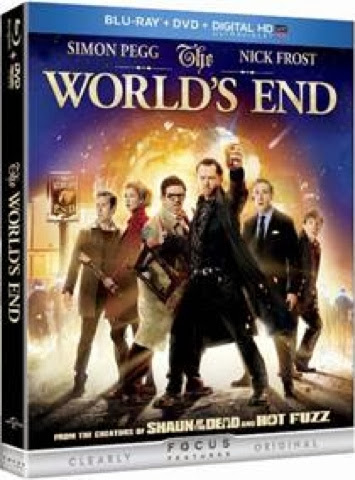 ON BLU-RAY™ COMBO PACK INCLUDING

BLU-RAY™, DVD AND DIGITAL HD WITH ULTRAVIOLET™, DVD & ON DEMAND

Universal City, California, September 26th, 2013 – Five middle-aged friends set out to relive a beer-fueled odyssey from their youth, and end up in an epic battle to save humankind in the outrageous comedy The World’s End, available on Blu-ray™ Combo Pack, including Blu-ray™, DVD and Digital HD with UltraViolet™, DVD and On Demand on November 19, 2013, from Universal Studios Home Entertainment.   Now fans can truly watch The World’s End anywhere, on any device!

Directed by Edgar Wright (Shaun of the Dead, Hot Fuzz), The World’s End’s irresistible humor has made it the toast of film reviewers across the nation.  Labeled “sheer comic perfection!” by Peter Travers of Rolling Stoneand called “Hilarious!” by Entertainment Weekly’s Chris Nashawaty, The World’s Endstars Simon Pegg (Star Trek Into Darkness, Paul) and Nick Frost (Snow White and the Huntsman, Paul). This is the third and final film in Wright’s The Ultimate Three Flavors Cornetto® Trilogy, which also features hitsShaun of the Dead and Hot Fuzz starring Pegg and Frost, available exclusively on Blu-ray™November 19th.

The World’s End also stars Paddy Considine (The Bourne Ultimatum), Martin Freeman (The Hobbit), Eddie Marsan (Sherlock Holmes), and Rosamund Pike (Jack Reacher). The Blu-ray™ Combo Pack serves up more than two hours of bonus content, including a gag reel, feature commentary with Simon Pegg and Nick Frost, and an insider’s look at the making of the funniest reunion picture ever made.

The Blu-ray™ Combo Pack of The World’s End includes a Blu-ray™, DVD and Digital HD with UltraViolet™.

·         Blu-ray™ unleashes the power of your HDTV and is the best way to watch movies at home, featuring 6X the picture resolution of DVD, exclusive extras and theater-quality surround sound.

·            Filling in the Blanks: The Stunts and FX of The World's End – Cast and crew discuss the prowess of
The World’s End stunt and VFX teams. Watch rehearsals of intricate fight scenes choreographed by some of the movies’ best stuntmen. Learn how the VFX team enhances the existing footage to perfect the film’s look and style.

·            Stunt Tapes – Behind-the-scenes of the bathroom fight, the twinbot fight and the beehive fight

·            Signs & Omens –  A film clip montage highlighting all the hidden clues and hints throughout the film.

Bonus Features on The World’s EndBlu-ray™ and DVD:

·            Completing the Golden Mile - The Making of The World's End– While on the surface The World’s End looks like a movie about a bunch of old friends getting drunk on a pub crawl, it’s actually about much more.  Look through the eyes of these frequent collaborators at the depth of the themes and the relationships between characters.