The Creator of HELLBOY, The Co-Creator of i,ZOMBIE and The Original Artist of WITCHFINDER Unite for a Tale of Victorian Horror and the Undead 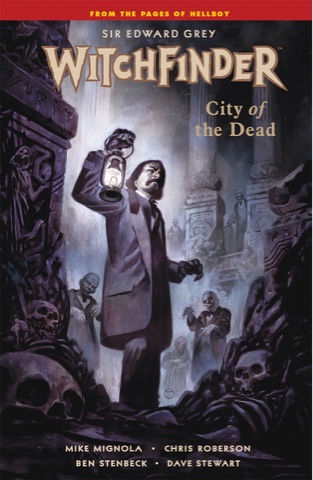 FOR IMMEDIATE RELEASE: MILWAUKIE, OR— This August, legendary Hellboy creator Mike Mignola, iZOMBIE co-creator Chris Roberson, original WITCHFINDER series artist Ben Stenbeck and colorist Michelle Madsen will unite for WITCHFINDER: CITY OF THE DEAD. In this five part miniseries from Dark Horse Comics, Sir Edward Grey, occult adviser to the queen, must defeat scores of flesh-eating corpses on the loose in London and explore a temple beneath London full of ancient secrets.  Artist Julián Totino Tedesco will provide covers for the series.

“One of the great things about the monster tropes in horror fiction is that they don't have to be limited to any specific setting,” said Chris Roberson. “Werewolf stories aren't all set in Eastern Europe, vampire stories don't have to take place in Victorian London, and zombies needn't be relegated to the post-apocalyptic scenario. There's a lot of fun to be had from taking these types of characters and transposing them into different historical periods and cultural milieus."

Mignola and Roberson are currently co-writing the acclaimed HELLBOY & THE BPRDadventures. “Chris's pitch for WITCHFINDER: CITY OF THE DEAD is what made us all realize he was a perfect writer to add to our little world,” said Mike Mignola. “Chris and Ben Stenbeck have outdone themselves on this book. I’m super excited about it!”

Stenbeck returns to WITCHFINDER, the title he helped launched in 2009, before working on BALTIMORE and the acclaimed FRANKENSTEIN UNDERGROUND. “It’s fantastic to return to the world of WITCHFINDER,” said Ben Stenbeck. “I get to go back to Edward Grey’s London and help to flesh it out a bit more. Hopefully I've gotten better at it in the 7 years since I last drew WITCHFINDER.”

“I've always been an enormous fan of Victorian-era occult detectives, and of Mignola's Sir Edward Grey in particular,” said Roberson. “One of the greatest things about Hellboy's world is the richness of its backstory, and it's been a real thrill to get to explore some of the uncharted territory and fill in some of the gaps in the map."

Posted by GenreOnline.net at 10:54 AM