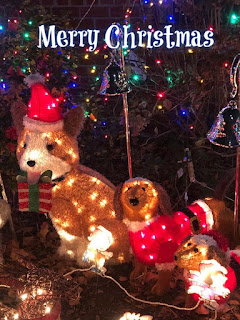 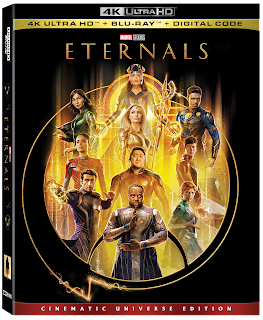 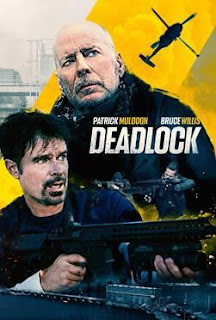 Synopsis:                          Bruce Willis stars as Ron Whitlock, a wanted criminal leading a team of mercenaries on a mission of vengeance. Convinced that the government is working against them, the merciless group brutally seizes an energy plant and holds everyone inside hostage. With a nearby town on the brink of massive flooding and destruction, it’s up to retired elite army ranger Mack Karr (Patrick Muldoon) to save thousands of innocent lives before it’s too late.

Posted by GenreOnline.net at 1:56 PM No comments:

SUPERGIRL: THE SIXTH AND FINAL SEASON Flying Into Homes on Blu-ray™ & DVD March 8, 2022 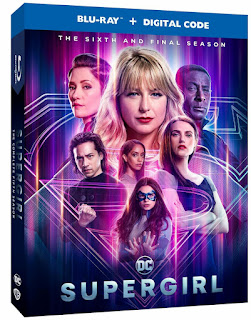 The Girl of Steel Takes Her Final Flight

Contains All 20 Exhilarating Episodes from the Sixth and Final Season, Deleted Scenes, Plus an All-New Special Featurette!

Supergirl: The Complete Series will also be available, containing all 126 exhilarating episodes from the phenomenal series, as well as countless hours of bonus features from all six epic, not-to-be-missed seasons. Supergirl: The Complete Series is priced to own on DVD for $119.99 SRP ($134.99 in Canada), and on Blu-ray for $134.99 SRP ($154.99 in Canada), representing a substantial savings over purchasing all six seasons individually.

In the sixth and final season, Supergirl is thrust into the greatest challenge of her life — forced to confront her own mortality, and the prospect of losing all hope. As her friends rally to help her in this difficult fight, a new Super-Villain arrives in National City and tests her resolve.

With Blu-ray’s unsurpassed picture and sound, Supergirl: The Sixth and Final Season Blu-ray release will include 1080p Full HD Video with DTS-HD Master Audio for English 5.1. Featuring all 20 episodes from the sixth season in high definition, as well as a digital code of the season (available in the U.S. only).

Supergirl is currently available to own on Digital. Digital purchase allows consumers to instantly stream and download to watch anywhere and anytime on their favorite devices. Digital movies and TV shows are available from various digital retailers including Prime Video, Apple TV, Google Play, Vudu and others.

Posted by GenreOnline.net at 10:09 AM No comments: 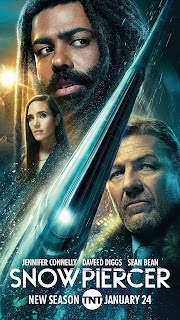 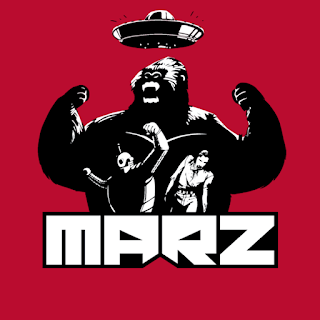 MARZ Raises $6.5 Million in Series A Funding to Scale Operations and Meet Demand for VFX

MARZ will use the injection of capital to grow its core VFX services business and to accelerate the research and development (R&D) of its AI for VFX technology solutions, which adds a high level of automation to address the significant and growing VFX capacity shortage that is plaguing the entertainment industry. In beta since Q1 2021, MARZ’s first AI for VFX solution has been used on 17 Hollywood productions to date, with that number expected to double in 2022. The funding will also enable MARZ to hire key personnel across research, engineering, and product; and to build out its technology infrastructure to increase production capacity and improve the efficiency of its artificial intelligence (AI) solutions.

Bootstrapped since its inception in 2018, MARZ is on a rapid growth trajectory. The company completed 13 projects in its first year, 21 in its second year, and 54 in its third year for notable clients such as Marvel, HBO, Netflix, and Apple TV. MARZ anticipates this rapid growth to continue after being named a primary vendor on a slate of significant future projects to be released later this year and in 2022; and following the launch of its end-to-end Character & Creature division geared to television timelines and budgets.

MARZ has grown from 45 people in 2019 to 194 today, with plans to grow the team to 300 over the next year. Of its current employees, more than 25% are focused on R&D, machine learning (ML), and AI. While MARZ maintains an office in Toronto, it is a remote-first company with a distributed workforce based in cities around the world, including Vancouver, Winnipeg, Montreal, Madrid, Los Angeles, Melbourne, London, Moscow, Mumbai, and Mexico City.

Of the 88 overall projects that MARZ has completed to date, 17 projects for clients ranging from Marvel, Disney, AMC, Peacock, and Apple TV have benefited from the beta release of the company’s first ‘AI for VFX’ technology solution.

By bringing together AI, computer graphics, and computer vision, MARZ is pioneering a new breed of VFX solutions that add net new capacity to the industry, while significantly increasing the speed and lowering the cost of outputting feature-film level quality VFX. According to MARZ co-founders, Jonathan Bronfman (co-president), Lon Molnar (co-president), and Matt Panousis (COO), the VFX capacity shortage issue faced by the entertainment industry right now is due to streaming wars, the corresponding explosion of on-demand content, and the ever-increasing importance of VFX in driving subscriber growth.

They note that, “These problems are exacerbated in the TV segment as consumer expectations regarding TV quality have risen dramatically, far outpacing the timelines and TV production budgets. We are addressing this issue with our next generation AI for VFX solutions that remove traditional capacity restraints, operate at unprecedented speeds, and offer meaningful price reductions. Ultimately, our aim is to democratize VFX and make it far more accessible to creatives around the world.”

“MARZ is one of the fastest growing VFX studios in the industry with a reputation for leveraging technology to deliver a best-in-class product within record timelines,” said Brahm Klar, partner at Round13 Capital. “By partnering with MARZ, alongside some of Canada's most successful investors, we can work closely with the team to build on the company's extraordinary success so far.” Concurrent with the funding, Klar will join the MARZ board of directors.

MARZ, short for Monsters Aliens Robots Zombies, is a technology and VFX company on a mission to help Hollywood studios push the boundaries, quality, and volume of TV content by delivering feature-film quality VFX on TV timelines. MARZ does this by harnessing proprietary AI software, GPU clusters, game engine technology, and world-class industry talent. Leveraging these pillars allows MARZ to consistently execute high volumes of shots with both speed and quality for premium TV projects. MARZ has recently worked on several premium TV series, including Marvel’s WandaVision, Netflix’s Shadow and Bone, HBO’s Watchmen, and Netflix’s The Umbrella Academy among others.

Posted by GenreOnline.net at 10:09 PM No comments:

DIRECTED BY JOHN CARPENTER, THE EXPLOSIVE CULT-CLASSIC ARRIVES ON 4K ULTRA HD FOR THE FIRST TIME 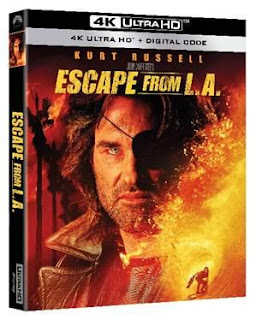 Snake Plissken is back in the high-octane thrill-rideJOHN CARPENTER’S ESCAPE FROM L.A., arriving on 4K Ultra HD for the first time ever February 22, 2022 from Paramount Home Entertainment.

Released in 1996, JOHN CARPENTER’S ESCAPE FROM L.A. was the highly anticipated follow up to the fan-favorite hit Escape from New York.  Kurt Russell returns as anti-hero Snake Plissken, who is called upon to save the world from a doomsday device after a 9.6 quake levels most of Los Angeles.

The 4K Ultra HD release features exceptional picture quality with Dolby Vision and 5.1 DTS-HD Master Audio. The disc also includes access to a Digital copy of the film and the original theatrical trailer.

Posted by GenreOnline.net at 10:22 AM No comments:

ESCAPE FROM MOGADISHU, debuting on Blu-ray™ & DVD January 18 from your friends at Well Go USA.

PLANO, TEXAS (December 3, 2021) –ESCAPE FROM MOGADISHU—an award-winning action-drama and South Korea’s official submission for Best International Feature at the 94th Academy Awards©—debuts on Blu-ray and DVD January 18 from Well Go USA Entertainment. Internationally-acclaimed, award-winning director Ryoo Seung-wan (Veteran, The Berlin File) brings together a stellar cast, including Kim Yoon-seok (The Chaser, The Yellow Sea), Huh Joon-ho (Kingdom, Illang: The Wolf Brigade), Zo In-sung (The Classic, The Great Battle), Koo Kyo-hwan (Train to Busan Presents: Peninsula, Netflix’sKingdom: Ashin of the North), Joung Man-sik (The Swordsman, Rampant) and Kim So-jin (The Spy Gone North, The King) for the riveting story of rival diplomats from North and South Korea who become trapped as a civil war rages in Somalia. With no aid from either government, their only shot at survival requires working together with their bitter adversaries. Bonus material includes production documentaries and a making-of featurette.

ESCAPE FROM MOGADISHU won an impressive six awards (out of 10 nominations) at the 30th Buil Film Awards, including Best Film and Best Screenplay (Ryoo Seung-wan, Ki-cheol Lee). The film received the most nominations of any film this year. In addition, the Korean Association of Film Critics Awards named Ryoo Seung-wan Best Director, plus awarded the film trophies for Best Supporting Actor (Huh Joon-ho), Best Cinematography (Choi Young-hwan), Best Music (Bang Jun-seok) and it made the list as one of the Ten Best Films of the Year.

Dramatically constructed based on actual events: when civil war explodes in 1991 between rebel factions and Somali government forces under dictator Mohamed Siad Barre, rival North and South Korean diplomats are trapped in the capital city, surrounded on all sides by what would emerge as some of the deadliest fighting of the conflict. With no aid from either Korean government—and no means of communicating with the outside world—the diplomats’ only shot at survival may require uniting with bitter adversaries to escape.

ESCAPE FROM MOGADISHU has a runtime of approximately 121 minutes and is not rated.

Posted by GenreOnline.net at 11:01 AM No comments: