A Disney Legend for a New Generation Comes Home On Digital,
4K Ultra HD, Blu-ray and Movies Anywhere June 25
DUMBO, the grand live-action adventure from Disney and visionary director Tim Burton, which expanded on the beloved animated classic and sent spirits soaring, prepares for a landing on June 25. Fall in love again with this heartfelt story when it swoops into homes on Digital in HD and 4K Ultra HD and Movies Anywhere, and physically on 4K Ultra HD, Blu-ray and DVD - with never-before-seen bonus features, deleted scenes, bloopers an
Posted by GenreOnline.net at 5:59 PM No comments:

Posted by GenreOnline.net at 5:57 PM No comments:

IT'S CHILD'S PLAY...FOR THE NEXT FOUR WEEKS!
GEMR'S COLLECTION COMPLETE OFFERS A LOOK AT
SEAN CLARK'S SCREEN-USED CHUCKY DOLL
AND OFFERS THE ULTIMATE CHILD'S PLAY CONTEST FOR FANS
Unearthed by the docu-series Collection Complete (which takes an in-depth look into the lives of artists and the collections that fuel their work, as presented by Gemr, an app for collectors worldwide), the show’s latest episode takes a look at the impact of horror cinema on Los-Angeles based filmmaker and collector Sean Clark, as well as one of the items which reside within his jaw-dropping private collection of screen-used props: a Child’s Play doll from 2017’s Cult of Chucky.
A deep dive into Clark’s life-long fascination with genre film, the episode focuses on his preschool introduction to horror via the films The Exorcist and The Texas Chain Saw Massacre, screen-used items from the latter director’s 1981 film The Funhouse which now exist in Clark’s collection, and one particularly creepy Good Guys doll which shares a shelf in his home with another diminutive demon, the evil Annabelle from The Conjuring films.
The series’ seventeenth episode (future installments are set to showcase other items in Clark’s collection, including a screen-used Hellraiser box and The Resonator prop from 1986’s From Beyond), past episodes of Collection Complete have ventured into the personal collections of filmmakers Mike Mendez of Tales of Halloween fame and designer, artist and pinup Micheline Pitt, among others.
Giveaway
What’s more, for the next four weeks, those who create a free account at Gemr.com’s horror club HERE will have a chance to WIN an Officially Licensed Child’s Play 2 Chucky Doll from Trick or Treat Studios (valued at over $500.00!) signed by the original Child’s Play director Tom Holland!
Collection Complete Horror Club Giveaway link: https://landing.gemr.com/ChildsPlay
Subscribe to the series' Youtube channel here to see previous episodes of Collection Complete, and for more on Collection Complete, ‘like’ them on Facebook here and follow them on Instagram at CollectionComplete and on Twitter at @CollectionComp.
ABOUT GEMR
Gemr is the leading platform for collectors to discover, display, discuss and buy & sell collectibles.  With over 75 million collectors worldwide, Gemr offers a vertically-integrated platform for all levels of collecting. Gemr currently has over 570,000 useres and over 540 unique clubs covering anime, gaming, horror, sci-fi, sports and more. Visit Gemr at www.gemr.com or download the app to join the Gemr world.
Links
Subscribe to Collection Complete YOUTUBE channel: https://www.youtube.com/channel/UCuD4UbaSPjPV8sm78UdjF5A/featured
Collection Complete Episode 2.9 link: https://www.youtube.com/watch?v=QG9auaqJMz0&feature=youtu.be
Collection Complete Mid-Season 2 Trailer link: https://www.youtube.com/watch?v=qqPaIfatXmQ
Collection Complete Official Sites and Social Media
Official Site: www.collection-complete.com
Facebook: https://www.facebook.com/CollectionComplete
Instagram: https://www.instagram.com/collectioncomplete
Twitter: https://twitter.com/collectioncomp
#  #  #
Posted by GenreOnline.net at 5:23 PM No comments: 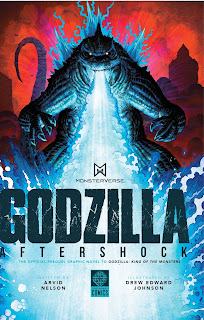 
Posted by GenreOnline.net at 4:47 PM No comments:

Well when I first heard about this, I thought it would be the monsters fighting each other "Mortal Kombat" style, but I have to admit, I got sucked into this episode even though this is more of the same from a channel that has inventively created an imaginative monster universe with professional quality effects and so forth. I know for horror fans, the monsters are the antiheroes of a sort, but when things become too nihilistic, it will alienate the casual viewer. Things I hope they avoid are, killing off the protagonist either off screen or right away without regard to his story and the potential created by giving us hints of a larger background and story to contrast against these monsters. I want to see the characters (fleshed out) and I want to see monsters fight because the weekly slaying of some morally questionable person loses it's entertainment value week after week because they have no way to survive. So shake it up Crypt Keepers cause monsters are only as fun as how they are used. Thank you and you're welcome.
(C) Copyright 2019 By Mark A. Rivera
All Rights Reserved.
Posted by GenreOnline.net at 6:44 AM No comments:

Posted by GenreOnline.net at 7:24 PM No comments: