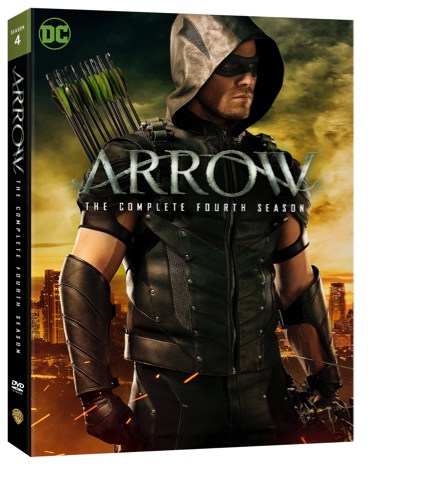 Contains All Action-Packed Episodes from the Fourth Season,

Plus All-New Featurettes, The 2015 Comic-Con Panel, Deleted Scenes and a Gag Reel!

The Crusade Continues On Blu-ray™ including Digital HD & DVD

BURBANK, CA (May 31, 2016) – Just in time for Arrow’s fifth season on The CW, viewers can catch up with the thrilling series as Warner Bros. Home Entertainment releases Arrow: The Complete Fourth Season on Blu-rayTM including Digital HD and DVD on August 30, 2016. Averaging 4 million viewers weekly for each original episode, Arrow is The CW’s #3 show among Total Viewers, behind The Flash and DC’s Legends of Tomorrow, and the #2 series on The CW amongst Adults 18-34.* The releasecontains all 23 exhilarating episodes from the fourth season, and The Flash crossover episode; plus over an hour and a half of extra content, including the 2015 Comic-Con Panel, never-before-seen featurettes, deleted scenes, and a gag reel. Arrow: The Complete Fourth Season is priced to own at $49.99 SRP for the DVD and $54.97 SRP for the Blu-ray including Digital HD.

After defeating his most formidable foe to date and riding off into the sunset with longtime flame Felicity Smoak, Oliver Queen (aka The Arrow) left Star City with the hopes of beginning a new life. But will Oliver ever truly be able to leave behind his past as The Arrow, and, if so, what becomes of the team he has worked so hard to assemble? Will military vet John Diggle, Oliver’s sister Thea Queen, and lawyer-turned-vigilante Laurel Lance continue Oliver's fight without him? And with Malcolm Merlyn having ascended to the top of the League of Assassins as the new Ra's al Ghul, is anyone really safe?

With Blu-ray’s unsurpassed picture and sound, Arrow: The Complete Fourth Season Blu-ray release will include 1080p Full HD Video with DTS-HD Master Audio for English 5.1. The 4-disc Blu-ray will feature a high-definition Blu-ray and a Digital HD copy of all 23 episodes from Season Four, as well as The Flash crossover episode.

23 ONE-HOUR EPISODES, PLUS THE FLASH CROSSOVER