News: TBS renews KING OF THE NERDS for third season

TBS to Crown Third King of the Nerds 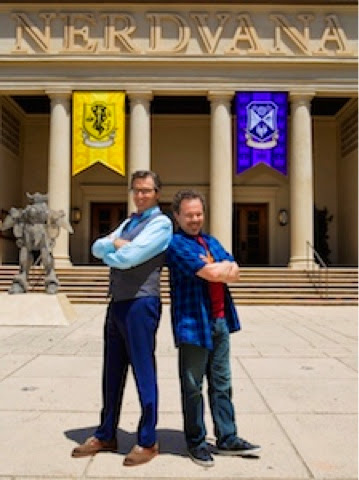 Nerdvana will be searching for its next ruler asTBS has ordered a third season of its unique competition series King of the Nerds. HostsRobert Carradine and Curtis Armstrong, who also serve as executive producers, will once again supervise the proceedings as competitors from across the nerd spectrum vie for the ultimate nerd title.

TBS has ordered eight episodes for the third season of King of the Nerds, which is slated to air in early 2015. The renewal comes on the heels of TBS's announcement that it has extended its hit hidden-camera game showDeal With It for an additional 10 episodes to air this fall.

In King of the Nerds, competitors face challenges that test their intellect, ingenuity, skills and pop-culture prowess. The nerds live together in "Nerdvana," competing first as teams before moving on to individual challenges. In the end, only one competitor will be named the quintessential master of all things nerdy, winning the $100,000 prize. Despite the show's gender-specific title, it’s been two females that have sat atop the throne of games in the prior seasons.

King of the Nerds originally premiered in 2012 and completed its second season this past March, averaging 1.5 million viewers andmore than 1 million adults 18-49, with a median age of only 35. The second season was executive-produced by Ben Silvermanand Chris Grant of Electus and Craig Armstrong, Rick Ringbakk and Charles Wachter of 5X5 Media, as well as Carradine and Armstrong. Electus International, the global distribution arm of Electus, distributesKing of the Nerds internationally.

"King of the Nerds demonstrates the power of nerd culture by drawing not only a fervent fan base but also the youngest audience of any current TBS original," said Michael Wright, president, head of programming for TBS, TNT and Turner Classic Movies (TCM). "We look forward to building on that success as more viewers discover this terrific competition series."

"We are thrilled to be growing our business with the amazing team at TBS and cannot be happier to be celebrating the hottest culture in the world," said Electus Founder and Chairman Ben Silverman. "Nerds rule!"

Fans can keep up to date with all the latestKing of the Nerds news through the show's website and social media outlets:

Posted by GenreOnline.net at 9:13 AM