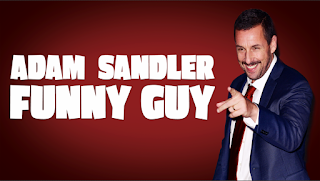 Get Inside Adam Sandler’s Comedy Magic in First Trailer for
"Adam Sandler: Funny Guy”
Critics may not always love Adam Sandler, but fans sure do. The boy from Brooklyn did not need showbiz connections to become a global superstar. Sandler has left his comedic mark on three decades of stage, screen, and song.
Adam’s lasting appeal has earned more than $2 billion at the box office. TV audiences got to know him as a writer and performer on SNL during the early ‘90s. Forty-four films include Billy Madison (1995), Happy Gilmore (1996), The Waterboy (1998), The Wedding Singer (1998), Big Daddy (1999), Mr. Deeds (2002), 50 First Dates (2004), The Longest Yard (2005), Click (2006), Grown Ups (2010), Just Go With It (2011), Grown Ups II (2013), Blended (2014) and Murder Mystery (2019), that achieved the biggest opening weekend for a film in the company’s history (source: Netflix).
Adam Sandler remains a consistent favorite among fans who are comforted that they will always have a good time. Get the inside story on this fascinating actor, comedian, screenwriter, producer, husband, father, and forever FUNNY GUY.
The feature-length biography ‘Adam Sandler: Funny Guy’ is now available on Amazon Prime.  https://amzn.to/2IS9xcX
Directed by Danielle Winter, produced by Dana Webber, ‘Adam Sandler: Funny Guy’ is distributed by Legacy Distribution.
YouTube Trailer: https://bit.ly/33hAXAb
Posted by GenreOnline.net at 6:00 PM