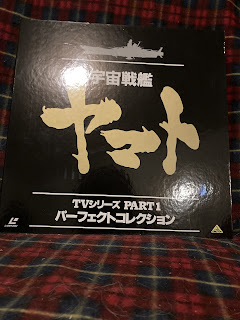 Wow! I just finished watching the Space Battleship Yamato: TV Series Season One: Part One: Perfect Collection Laserdisc Box Set and I loved it! Completely in Japanese with no English Subtitles at all, despite how the title of the set sounds, this is the entire Quest For Iscandar First Series all be it a little different from the American counterpart Star Blazers, which I own and reviewed long ago on DVD. The picture quality is equal the American Voyager releases from the early 2000s. I grew up watching Star Blazers as a kid in the 1970s and have accumulated the entire three series and all the animated feature films as well as documentary on the making of the series. I also own the Japanese live action feature film released in 2010 on Blu-ray Disc so rest assured I am a huge fan and the opportunity to see the series in it’s original broadcast form from Japan was sublime.

Compared to modern anime, Star Blazers AKA Space Battleship Yamato is as dated as comparing the Hannah Barbera Superfriends to Bruce Tim’s Justice League Unlimited, but I still love it. If you are a super fan don’t let the lack of English subtitles deter you from watching this set. I hope I can get the other two series and the animated movie collection one day, but regardless of what happens, I am grateful to have both the U.S. domestic DVDs and the Japanese first series on laserdisc.

The picture quality and mono sound are spot on too. If you love the show and don’t mind following the action even if you can’t understand what they are saying, Space Battleship Yamato: TV Series Season One: Part One: Perfect Collection Laserdisc Box Set is something worth seeking out.