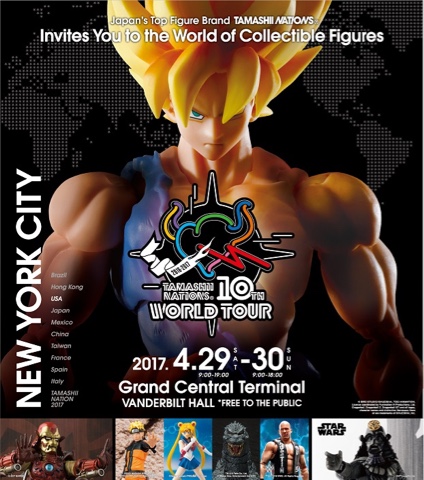 Taito-ku, TOKYO – February 17, 2017: BANDAI Co., Ltd., a Japanese toy company, announces a worldwide tour of figure display events to be held in 10 cities over the course of the year in commemoration of the 10th anniversary of its TAMASHII NATIONS brand of collectible figures.

The twofold aim is to thank all of the TAMASHI NATIONSfans who have supported the brand, and to spread the word about TAMASHII NATIONS to even more potential fans across the globe.

The event will center around new products from the DRAGON BALL series (the latest incarnation of which, DRAGON BALL SUPER, is now airing in the US), and the MEISHO MOVIE/MANGA REALIZATION action figure series of popular STAR WARS and MARVEL UNIVERSE characters re-envisioned in Japanese samurai style. In addition, popular anime characters from NARUTO and SAILOR MOON, plus characters already well known to fans from the WWE franchise and GODZILLA series, will also be on display. Other interactive opportunities are planned as well, such as a “touch and try” corner allowing fans to interact with the actual products and a photo spot for taking fun pictures. A total of 9 commemorative products will make their world debut for sale on-site as well.

The World Tour kicked off in December, 2016 in Sao Paolo, Brazil. It was followed by Hong Kong in February, and coming up in April, New York City, which will follow up with June, in Mexico. The worldwide celebration will continue with exciting new events and product unveilings in other cities leading up to October of 2017, with the final stop, TAMASHII NATION 2017, being held in November in Tokyo -- a spectacular event commemorating the 10 year history of the beloved brand.