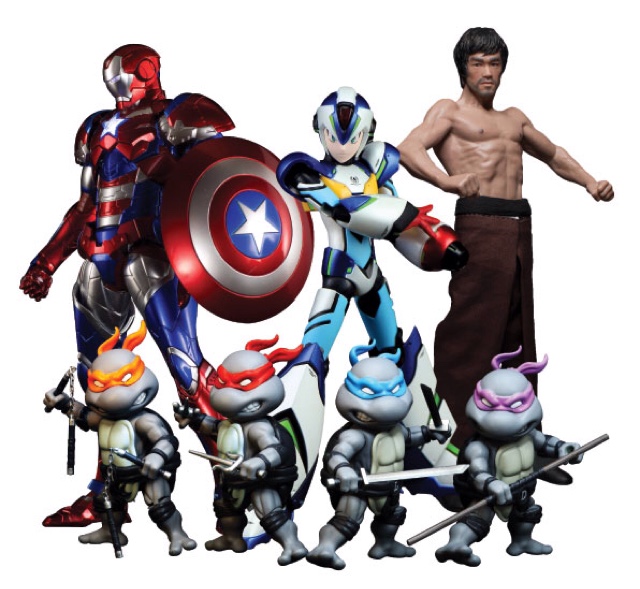 Online Contest Is Open To ALLFans And Collectors And Features

Bluefin invites collectors everywhere tovisit this website destination -- http://bit.ly/BLUEFIN – or also stop by the Bluefin Booth #401 at Comic-Con to submit an entry to win an exciting Grand Prize bundle.

The Grand Prize bundle features valuable and exclusive collectible figures from premier manufactures such as TruForce Collectibles, Hero Cross, SEN-TI-NELand Storm Collectibles. No purchase is necessary to enter the contest.

The contest is open now and is open to all collectors. One winner will be selected at random on August 1st, 2016.

Contest entry information on the featured form. To increase the chances of winning, please also follow Bluefin on its social media networks including on Twitter athttps://twitter.com/bluefinbrands and also on Facebook athttps://www.facebook.com/BluefinBrands/.

This prize package has a combined retail value of more than $390.00!!

Comic-Con International is one of the nation’s largest comic book, science fiction and pop culture events, and will take place July 20th–24th at the San Diego Convention Center, in San Diego, CA. Complete details on Comic-Con are available at: www.comic-con.org.

TruForce Collectibles is proud to announce its first San Diego Comic Con Exclusive…X-Boost!  This is a one-of-a-kind creation where X’s armor has no limit and his true abilities are unleashed. The boost energy from his buster and thrusters increase significantly, however it puts tremendous pressure on his body. Therefore, X-Boost can only maintain this form for 10 seconds.” The figure stands at around 6 inches tall, features LED in the buster, die-cast armor, multiple accessories and a stand.

An exclusive product for 2016 Comic Con, this set of 4 contains special black and white versions of MHMF#06 Leonardo, MHMF#07 Raphael, MHMF#08 Michelangelo and MHMF#09 Donatello. The 3 inch die-cast figures each feature a fully poseable body with 14 points of articulation that gives the figure great mobility, and each figure comes with its unique signature weapon!

Introducing the 3rd installment in the RE:EDIT IRON MAN series – Iron Patriot! Based on the Extremis Armor, the head mask and the star-shaped Arc Reactor are made from a new sculpt! Captain America’s shield is also included as a bonus to match its distinctive ‘Stars and Stripes’ color scheme. Numerous different materials, such as ABS/PVC/DIE-CAST/PA/POM are used for production. The figure is fully painted with LED light-up features for its chest and eyes. The display base included can be connected with bases from the previous series. For SDCC 2016, this figure also comes with a unique exclusive holographic backdrop!

Storm Collectibles presents its first Bruce Lee, 1/12 scale Premium Figure with two head sculpts fully sculpted by Arnie Kim! It is the first time ever a bearded Bruce Lee face has been sculpted. It is also the very first 1/12 scale size Bruce Lee been produced in high quality statue format. The 2016 San Diego Comic Con Version features exclusive brown martial arts pants as seen in the movie ‘Enter the Dragon.’ Bruce's philosophy, JKD training, physical ability, and appearance have been inspired and drilled into each of our hearts and they all started from Bruce's personal life.