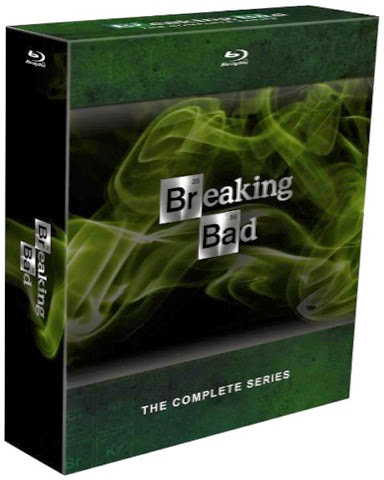 “…one of the great shows of television's Golden Age…”

CULVER CITY, CALIF. (April 7, 2014) – The chemistry continues on June 3 when Sony Pictures Home Entertainment releases one of the most critically acclaimed and award-winning shows of all time, BREAKING BAD: THE COMPLETE SERIES, available on Blu-ray™ with newly created packaging, and, for the first time ever, as a complete series set on DVD.  Just in time for Father’s Day and graduation gift giving, the explosive saga of high school chemistry teacher-turned-meth kingpin Walter White is available in its entirety, including all 62 uncut, uncensored episodes.  The 16-disc Blu-ray set features more than 55 hours of bonus content, including the Blu-ray exclusive “No Half Measures: Creating the Final Season of Breaking Bad” documentary,chronicling the making of the final season, from filming the first table read to the very last day on set and everything in between. The 21-disc DVD set features more than 50 hours of bonus content.

Synopsis:
The incredible saga of high school chemistry teacher-turned-meth kingpin Walter White is here in its entirety: all 62 uncut, uncensored episodes! Emmy® winner Bryan Cranston portrays Walter White, a family man who turns to crime after a lung cancer diagnosis unravels his bland but simple life. Recruiting former student and small-time drug dealer Jesse Pinkman (Emmy® winner Aaron Paul) to be his partner in crime, Walt rises to the top of the meth trade, leaving a trail of bodies in his wake. But he can’t keep his dogged DEA agent brother-in-law Hank Schrader (Dean Norris) off his trail forever. Will Walt get away with it all, or die trying? Re-live every moment of this groundbreaking original series with riveting performances by Emmy® winner Anna Gunn, Giancarlo Esposito, Jonathan Banks, Bob Odenkirk, Betsy Brandt, RJ Mitte and more. Breaking Bad was executive produced by Vince Gilligan, Mark Johnson and Michelle MacLaren. The complete box set is loaded with special features.

More than 55 hours of special features, including:

·      “No Half Measures: Creating the Final Season of Breaking Bad,” an exclusive two-hour documentary that chronicles the filming of the final eight    episodes.

·      Bad Memories – Bryan Cranston and Aaron Paul talk about the show ending and some of their favorite moments.

·      Bryan Cranston: Director – Go on set with Bryan Cranston as he directs the first episode of The Final Season, entitled "Blood Money."

·      Scene Envy – The cast tell us which scene they wish they could have been in.

·      Shocking Moments - The stars reveal the moments that shocked them most.

·      A Look Ahead to the Final Season – The cast gives their thoughts on what an amazing final season this is going to be!

·      From Walt to Heisenberg – From high school teacher to deadly meth dealer, watch as Walter White quickly transforms into Heisenberg.

·      How Will It End? – At the beginning of Season 5, the cast gives their thoughts on how they think the show will end.

·     The Ultimate Chess Match – Members of the cast and crew discuss Walter White and Gus Fring’s extraordinary and complicated battle of wits and their struggle for Jesse’s allegiance.

·      Looking Back:  A Season Four Retrospective - Season Four’s most surprising and memorable moments.

·    Ted's Wipeout – In Episode 411, “Crawl Space,” Ted Beneke suffers a head injury while trying to escape from Saul’s goons.  In this featurette, Christopher Cousins (Ted) explains how this shocking stunt was accomplished.

·    The Truck Attack Storyboard Comparison – A side-by-side comparison of the Los Pollos Hermanos truck attack and the brilliant shot-by-shot storyboards that were created for the episode “Bullet Points.”

·    Walt and the Challenger Storyboard Comparison – A side-by-side comparison of Walt’s joy ride in Walt Jr.’s new Dodge Challenger and the storyboards that were developed for that sequence by the writer and director, Peter Gould.

More than 50 hours from Season 1 through the Final Season

BREAKING BAD: THE COMPLETE SERIES is not rated.