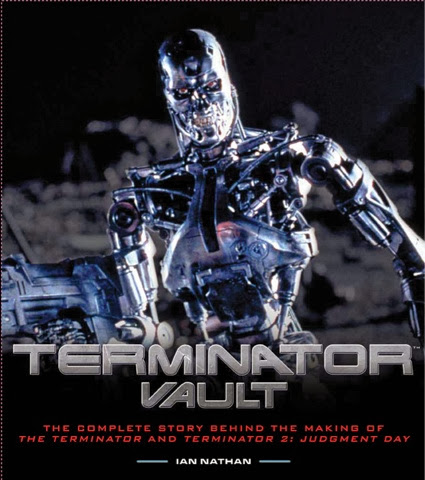 New book is filled with never-been-seen features, from concept drawings to reproductions of original scripts, exploring the legacy of the Terminator franchise.

THE COMPLETE STORY BEHIND THE MAKING OF THE TERMINATOR AND TERMINATOR 2: JUDGEMENT DAY

THE TERMINATOR is back in this magnificent behind-the scenes look at the movies that revolutionized movie-making.

Long before Titanic and Avatar broke box-office records and won countless awards, James Cameron announced his genius with the 1984 release of The Terminator. Nothing like it had ever been seen before-it fused time travel, thrilling action, artificial intelligence, and terror with provocative questions about the human race-and of course, it made Arnold Schwarzenegger an international superstar. The movie's 1991 sequel, Terminator 2: Judgment Day, has some of the greatest special effects in movie history and remains one of the most influential science fiction films of all time. The story of Sarah and John Connor's fight against the advanced assassin cyborg, the T-1000, is an astonishing look at the battle between good and evil.

Now, for the first time ever, here is the complete story of the Terminator world.Terminator Vault, written by acclaimed film expert Ian Nathan and with a foreword by "Governator" Schwarzenegger, takes a behind-the-scenes look at the making of both films, from the initial conception of Skynet (the AI system determined to destroy humanity) to the creation of the films' special effects, many of which had never been previously attempted. Reproductions of original scripts and concept drawings provide completely new insights into the Terminator backstory, and there are over 170 color images of the development, production, and more.  In addition, there’s brand new interviews with the filmmaking team, including Cameron and producer Gail Hurd.

This is a must-have book for any Terminator fan, released in anticipation of the first film's thirtieth anniversary.

Ian Nathan is the author of Alien Vault and executive editor of Empire, the world's leading film magazine. He has written for many publications, including the London Times and Independent.  www.empireonline.com