The fifth season of "The Handmaid's Tale." The new season returns on September 14, 2022 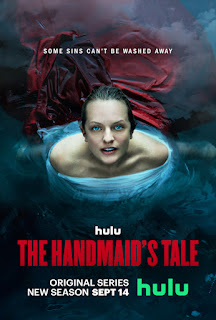 Hulu has debuted the official trailer for the fifth season of "The Handmaid's Tale." The new season returns with two episodes on September 14th. New episodes stream Wednesdays.

SEASON SYNOPSIS: June faces consequences for killing Commander Waterford while struggling to redefine her identity and purpose. The widowed Serena attempts to raise her profile in Toronto as Gilead’s influence creeps into Canada. Commander Lawrence works with Nick and Aunt Lydia as he tries to reform Gilead and rise in power. June, Luke and Moira fight Gilead from a distance as they continue their mission to save and reunite with Hannah.

SERIES SYNOPSIS: Adapted from the classic novel by Margaret Atwood, The Handmaid’s Tale is the story of life in the dystopia of Gilead, a totalitarian society in what was formerly the United States. Offred (Elizabeth Moss), one of the few fertile women known as Handmaids in the oppressive Republic of Gilead, struggles to survive as a reproductive surrogate for a powerful Commander and his resentful wife.