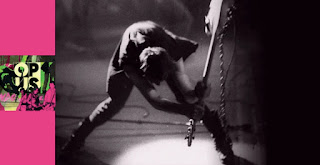 December 16, 2019 - Consequence of Sound and Sony Music Entertainment have partnered together for another season of The Opus, a podcast that explores legendary albums and their ongoing legacy. The sixth season has taken it back to 1979 and The Clash's legendary album London Calling. The English rockers opened up all the rock 'n' roll doors their fellow punk colleagues had slammed over the last decade.
Host Andy Bothwell, aka Astronautalis, will be joined by guests throughout the season including Brit Daniel (Spoon), Lee "Scratch" Perry, Laura Jane Grace (Against Me!), Joe Ely, Hamilton Leithauser (The Walkmen), AJJ (fka Andrew Jackson Jihad), Fat Tony (Rapper), Donita Sparks (L7), Yeek (Singer), Lauren Denitzio (Worriers), Chardine Taylor-Stone (drummer for Big Joanie and Civil rights activist), Joseph Patel (filmmaker Vice/MTV Docs), Vance Wallenstein (Head of Design for MOMA PS1) and Dan Reilly (Rolling Stone/Spin/Entertainment Weekly).
Together, they discuss how London Calling didn't need to be punk to prove how punk it was, how it didn't need to be a giant arena record to prove how much it rocked and how it managed to introduce all kinds of culture with zero pretension.
"London Calling is the biggest season of The Opus yet, and that's not an overstatement. Each episode is fueled by a revolving door of guests that not only bring justice to the legendary double album, but shed a new light on it," shares Consequence of Sound's Editor-in-Chief Michael Roffman on this monumental season of The Opus. "Host Andy Bothwell is also thinking outside the box behind the boards to deliver a true audio spectacle each week. Rest assured, diehard fans of The Clash who come in will no doubt walk out in a brand new Cadillac."
Fans can stream the first episode today at https://consequenceofsound.net/2019/12/the-opus-the-clash-episode-one/.
Past seasons of The Opus have explored the ever-evolving legacies of four iconic records: Bob Dylan's Blood on the Tracks, The Jimi Hendrix Experience's Electric Ladyland, Jeff Buckley's Grace, Willie Nelson's Red Headed Stranger and most recently, Ozzy Osbourne's Blizzard of Ozz.
Fans can expect a new album to be explored each month on The Opus. For more information, visit https://consequenceofsound.net/theopus.
Subscribe to The Opus:
Apple Podcasts: https://podcasts.apple.com/us/podcast/the-opus/id1441998476
Spotify: https://open.spotify.com/show/3sSuqy51OGn92Z4OmXQfq9
Google Play: https://play.google.com/music/m/I3viwda7pg2nmj7dixngqntwdki?t=The_Opus
Stitcher: https://www.stitcher.com/podcast/consequence-of-sound/the-opus
Radio Public: https://radiopublic.com/the-opus-WkPP0N
Follow The Opus:
Website: http://consequenceofsound.net/
Facebook: https://www.facebook.com/TheOpusCPN/
PodChaser: https://www.podchaser.com/podcasts/the-opus-755607