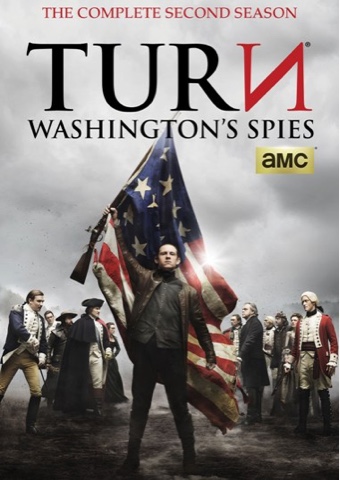 THE REVOLUTION HAS BEGUN!

BEVERLY HILLS, CA – On March 22ndAnchor Bay Entertainment releases AMC’s critically acclaimed Revolutionary War drama “TURN: Washington’s Spies - The Complete Second Season” on DVD. Available as a 3-disc set, “TURN: Washington’s Spies - The Complete Second Season” contains all 10 episodes from the second season of the series that reveals the true story of the turncoats of the American Revolution who gave birth to modern spycraft during the birth of our country. The DVD release is also filled with insightful bonus features about the making of this stylish cloak-and-dagger series including featurettes and deleted scenes. Pre-book date is February 17, 2016.

Jamie Bell (Snowpiercer, Fantastic Four) stars as Abraham Woodhull, a farmer living in British-occupied Long Island during the Revolutionary War who bands together with his childhood friends to form the Culper Ring, America’s first spy ring.  “TURN: Washington’s Spies - The Complete Second Season” moves deeper into the battles waged by soldiers and civilians alike in the pursuit of freedom and the sacrifices they’re willing to make to secure it. As Abe becomes more committed to the Culper Ring activities, George Washington (Ian Kahn) battles both personal demons and betrayal from within his ranks that threaten both his leadership and the fate of the revolution. As the colonies struggle to become a nation, the outcome of the revolution will hinge on alliances both on and off the battlefield.

“TURN: Washington’s Spies - The Complete Second Season” turns up the excitement and intrigue for its sophomore season. Each episode offers new twists and unexpected turns that will have viewers on the edge of their seats and wondering where it will all lead – making this a history lesson like no other.

Season three of “TURN: Washington’s Spies” will premiere on AMC in Spring- 2016.

Posted by GenreOnline.net at 7:31 PM