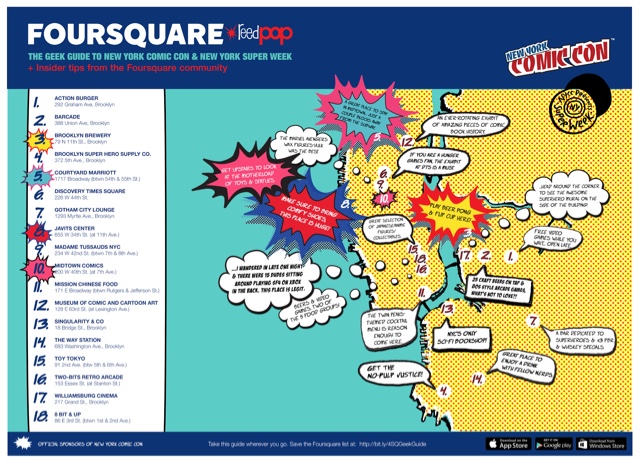 With tens of thousands of people swooping into New York next week for the kickoff of New York Super Week (10/5) and the 10th edition of New York Comic Con, Foursquare and ReedPOPwant to make sure there is no geek stone left unturned.  The city guide app and pop culture experts joined forces to create the Ultimate Geek Guide to New York – an infographic map that highlights some nerd-tastic, comic-centric hidden gems, stores, bars, restaurants, and museums throughout the city to visit to extend the week’s festivities.

Tip: “Very good beers, nice authentic atmosphere. All you need to meet some friends and have a chat!” – Maxine

Tip: “Superhero store that poses as a front for a non-profit supporting kids creativity?! This place is just the best. Restock on capes, buy cans of gravity, or follow the trap door to volunteer with kids.” – Andrea

Tip:  “Courtyard by Marriott shares this space with Residence and is the official hotel of New York Comic Con. The Bistro will be serving NYCC themed cocktails.” - Foursquare

Tip: “If you are a Hunger Gamesfan, the exhibit at DTS is a must.” – Kayleigh

Tip: “Lots of different event/conventions on. Make sure to bring comfy shoes, this place is huge!” – Chloe

Tip: “The Marvel Super heroes4D show was amazing. In addition to the show you also get to see all the Marvel Avengers wax figures-Hulk was the best.” –Sandra

Tip: “Get upstairs to look at the motherload of toys and statues” – Michael

Tip: “The twin peaks themed bathroom by itself is worth the trip” – John

Tip: “An ever rotating exhibit of amazing pieces of comic book history. A must visit for any comics fans!” – Dora

Tip: “Great place to enjoy a drink with fellow nerds. The TARDIS bathroom is a sight to see but the friendly bartenders are also just as amazing. They have a drink & draw the 2nd Saturday of every month.” – Will

Tip: “Great theater! Check out a weekend matinee for $8.50 and be sure to head around the corner afterwards to see theawesome superhero mural on the side of the building!” – Nikki

Tip: “Not only is there a coin-op SF2 Champion Edition machine in the front, but I wandered in late one night and there were 15 dudes sitting around playing SF4 on Xbox in the back. This place is legit.” – Den

Foursquare also created a handy in-app list with all of these locations so users can see ratings, useful tips and more.