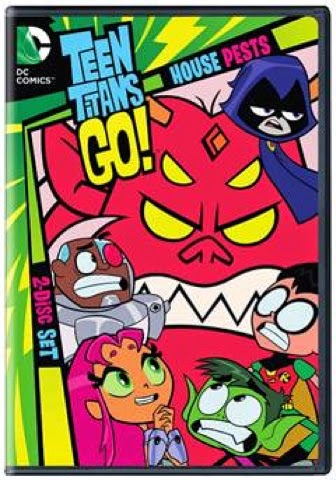 Teen Titans are a GO, GO, GO! Join DC Comics characters Robin, Raven, Starfire, Beast Boy, and Cyborg in their never-ending quest for goof, justice and maybe a little couch time. Things kick off with a backwards battle as Robin faces off against his Bizzaro World counterpart, Nibor. Raven is pushed to her limits during Crazy Day and it’s anything but a vacation when the Teen Titans visit Starfire’s home world. Don’t miss a single serving as the Titans have their hands full keepin’ the scene both crime-free and boredom-free in this all-new 2-disc collection!

Warner Bros. Home Entertainment is excited to release Teen Titans Go!: House Pests on DVD for fans that enjoy the #1 cable show for boys 6-11,” said Mary Ellen Thomas, WBHE Vice President, Family & Animation Marketing. “This release captures all the humor and action fans love about Teen Titans Go! and they will want to watch it again and again

Posted by GenreOnline.net at 10:52 AM