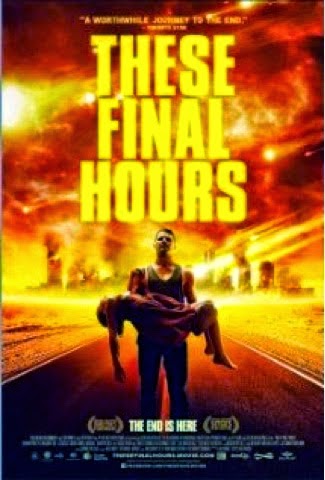 These Final Hours is an Australian post apocalyptic end of the world film that was released in 2013 and after acclaim at Cannes, the film is finally being given an official USA theatrical release on March 6, 2015. An asteroid capable of destroying all life on the planet has crashed in the North Atlantic and created a blast wave that will cover the entire planet and incinerate all life as know it in the process.

In Perth, the citizens have been notified that they have 12 hours of life left to live. James, a troubled twenty something man just wants to numb the pain by taking as much drugs and booze as he can and spending his final hours with his girlfriend. However as society begins to fall apart around him he saves a young girl named Rose from being raped. With no one else to take her to her family, James keeps her in tow and together they realize how they want to spend their moments.

Directed by Zak Hilditch and filmed on location in Perth, These Final Hours covers familiar ground covered in other end of the world thrillers, but unlike some movies which tend to focus too much on a few characters without giving any sense of the greater picture at hand, Hilditch manages to pull off both with clever editing, a good use of radio voice over and an excellent cast of Australian actors. The film has a very natural feel to it too. Characters lament about how painful being incinerated alive will be, which while morbid it is still something I have never heard any characters address in a film like this and besides the fear of death, the possibility of it being a painful one is never once mentioned in most end of the world movies, but I think it is something we all have in our minds.

Even if it were for just a second, would we feel anything?" Like getting a shot at the doctor's office where despite having received vaccinations and having blood drawn from us many times, once in a while we feel that pinch from the injection and it hurts. The film also does not try and candy coat the bleakness of the situation and yet it doesn't dwell on it. The characters we meet are well developed even if they only get a few minutes of screen-time. Like most films in this sub genre, the story is about redemption, but unlike many others it does not feel preachy and despite the bleak situation, there is a certain human comfort reached by the viewer as though one was watching another's journey in the face of death and because the characters are very human and are largely neither good or bad, the film accepts the human condition as the individual presents his or herself and allows the viewer to do the same and have empathy for them.

I liked this movie a lot more than I expected. Would I want to watch it over and over again, no. However I would not mind sharing the experience of seeing a screening of These Final Hours with one who has not seen it yet. Then be thankful and hope nothing like that ever comes to pass.

Once again These Final Hours will open in the USA on March 6, 2015. Additional information can be found at www.wellgousa.com.

(C) By Mark Rivera
All Rights Reserved.
Posted by GenreOnline.net at 9:20 AM