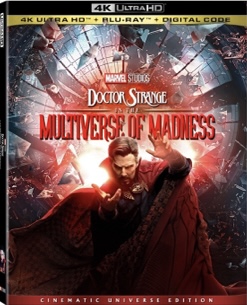 Following some point not long after the events of Spider-Man: No Way Home, Sam Raimi’s first official feature film within the MCU and his fourth feature film based on a Marvel Superhero entitled Doctor Strange and the Multiverse of Madness begins in the midst of a journey between worlds as a young woman named America Chavez (Xochitl Gomez), who has the power to literally blow wholes in the fabric of the multiverse, is being assisted by an alternate Doctor Strange (Benedict Cumberbatch) while fleeing from a demonic entity only to have Strange become mortally wounded and in desperation attempt to siphon America’s ability, which she does not know how to control and if her ability is taken from her, she will die. Luckily America’s scream blows a hole into the MCU where she meets our Doctor Strange, who goes searching for the Scarlett Witch (Elizabeth Olsen), leading to threats and deadly confrontations. The Scarlett Witch has taken possession of a book of corrupting black magic and is trying to capture America Chavez to steal her power so she can go anywhere in the multiverse and take the kids from an alternate version of herself that she could not hold onto after the events of WandaVision.

Sam Raimi is a perfect fit for fantastic cinema as in genre films and he uses both his previous experience directing the original Spider-Man Trilogy and The Evil Dead Trilogy to his advantage and the audience’s delight to craft a film rich in action and intrigue as well as signature Sam Raimi style with a touch of humor and the expected short, but memorable cameo appearance by Bruce Campbell.

Marvel Studios has released Doctor Strange and the Multiverse of Madness for sale on digital platforms with bonus features as well as the movie only free to stream on their Disney + Streaming Service. I would love to compare the 4K Blu-ray release that will debut on July, 26, 2022, to this digital copy because the 4K Dolby Vision with Dolby ATMOS Soundtrack is amazing. Streaming has come a long way. English Subtitles for the Deaf and Hearing Impaired are also provided along with a screen specific audio commentary recorded in April of 2022 with Sam Raimi, Richard Palmer and Michael Waldron.

This is supported by several short featurettes covering the making of the film (11:11), introducing the character of America Chavez (3:30), Sam Raimi’s style as a filmmaker (5:02), a Gag Reel (2:29) and three deleted scenes that can be viewed individually or in succession (3:07). The interactive menus on the Apple TV 4K are easy to navigate and simple.

Doctor Strange and the Multiverse of Madness is available now to stream through multiple streaming platforms, including Movies Anywhere and is well worth a look.