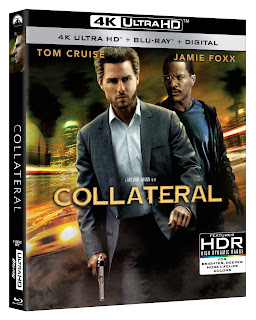 Tom Cruise and Jamie Foxx Star in the Acclaimed Action-Thriller,
Arriving on 4K Ultra HD For the First Time

The 4K Ultra HD/Blu-ray Combo includes access to a Digital copy of the film, as well as the following previously released bonus content:

o   City of Night: The Making of Collateral

A stylish and compelling noir thriller,COLLATERAL received both critical and audience acclaim.  Tom Cruise gives a chilling performance as Vincent, a cool, calculating contract killer at the top of his game.  Jamie Foxx received an Academy Award®nomination* for his portrayal of Max, a cabbie with big dreams and little to show for it.  The film showcases the actors as Max transports Vincent on his next job - one night, five stops, five hits and a getaway.  And after this fateful night, neither man will ever be the same.