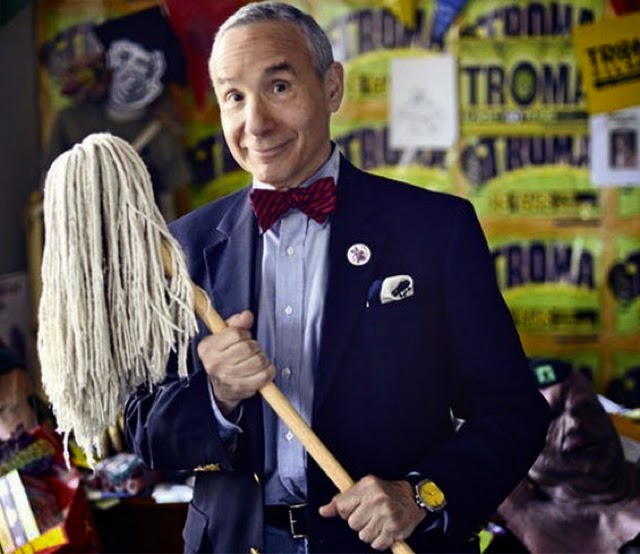 New York, N.Y., March 22, 2014 - Greetings from Tromaville! This Saturday March 29, 2014 the prestigious American Cinematheque will be honoring 40 years of Lloyd Kaufman, Michael Herz, and Troma Entertainment with an evening of tribute paying homage to the films of legendary director.

The four Tro-mazing films selected to be showcased are:

1984, Troma Entertainment, 87 min. Dirs. Michael Herz, Lloyd Kaufman.
When nerdy janitor Melvin falls into a vat of nuclear waste, he is suddenly transformed into a mutant superhero who lays waste to evildoers of all kinds and becomes a savior to his town. The first of Troma's anti-corporate satires, THE TOXIC AVENGER is still one of the best - and most popular, having spawned multiple sequels and spin-offs. Co-director Lloyd Kaufman's message, however, is firmly buried under some of the most spectacular gore and slapstick comedy ever put to celluloid. 2014 celebrates the 30th Anniversary of the "Toxic Avenger!"

1986, Troma Entertainment, 85 min. Dirs. Richard W. Haines, Lloyd Kaufman.
A high school located next to a nuclear power plant serves as the setting for one of Troma's most outrageous and hilarious features, a gory, post-apocalyptic satire about teenagers whose sex yields a gang-fighting monster after they smoke some radioactive pot. As always, co-director Lloyd Kaufman sets out to shock, entertain and enlighten in equal measures with  that balances an environmental message with sex, drugs and exuberantly graphic violence. Troma's 1986 cult smash-hit has been discovered by younger audiences and reached a new "atomic high" in popularity since the release of "Return to Nuke 'Em High: Vol. 1" this year.

1996, Troma Entertainment, 104 min. Dir. Lloyd Kaufman.
Shakespeare's classic gets Troma-tized, courtesy of director Lloyd Kaufman and screenwriter James Gunn. The bard's young lovers are transposed to a modern day Manhattan, where Kaufman and Gunn largely stick to the original play's structure but infuse it with liberal helpings of sex, violence and profanity. The result is one of Troma's best films, a movie that USA Today described as "sexy, sweet, and surreal." The eclectic cast includes scream queens Debbie Rochon and Tiffany Shepis, Troma star Will Keenan and even Lemmy from Motorhead as the narrator! Body Piercing. Kinky Sex. Dismemberment. All of the things that made Shakespeare great!

2013, Troma Entertainment, 85 min. Dir. Lloyd Kaufman.
Volume 1 of Lloyd Kaufman's sistine chapel is also his first film shot on digital. "Return to Nuke 'Em High: Vol. 1," a hybrid sequel/reboot of the original "Class of Nuke 'Em High", returns to New Jersey's Tromaville High , where the first film's neighboring nuclear power plant has been replaced by the Tromorganic food-processing plant. When glee club members mutate into violent Cretins after eating tainted tacos, blogger Chrissy (Asta Paredes) and her girlfriend (Catherine Corcoran) realize something rotten is going on at Tromorganic. The first installment of this KILL BILL-style two-part epic oozes with the distinctive mix of goofy gore, soft-core sleaze and low-budget special effects that has endeared Troma to their legions of fans for decades. "Return to Nuke 'Em High: Vol. 1" has been selected by the Museum of Modern Art as part of their prestigious Contenders Series, an annual collection of the year's most influential, innovative films that are believed will stand the test of time. "Return to Nuke 'Em High: Vol. 1" continues to play in front of sold-out crowds worldwide and winning over critics, a trend that started at the Cannes Film Festival.